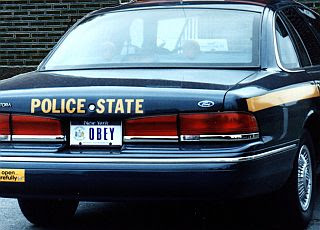 There's been lots of buzz in Greater Left Blogsylvania over the pre-emptive strikes that the cops have been making on potential protesters in Minnesota. It seems like they want the upcoming RNC to be held in an atmosphere of respectful shock and awe. From Glennzilla:

There is clearly an intent on the part of law enforcement authorities here to engage in extreme and highly intimidating raids against those who are planning to protest the Convention. The DNC in Denver was the site of several quite ugly incidents where law enforcement acted on behalf of Democratic Party officials and the corporate elite that funded the Convention to keep the media and protesters from doing anything remotely off-script. But the massive and plainly excessive preemptive police raids in Minnesota are of a different order altogether. Targeting people with automatic-weapons-carrying SWAT teams and mass raids in their homes, who are suspected of nothing more than planning dissident political protests at a political convention and who have engaged in no illegal activity whatsoever, is about as redolent of the worst tactics of a police state as can be imagined.

So what can this blogger add? In a word, history. We'll consider three major past events and how they relate to current events. If you were wondering why the current crop of thugs in uniform is so utterly blasé in their regards for the law - it's because they know damned well that there are never any consequences. And this is by no means a brand new phenomenon characteristic of the Bush administration.

Consider first the violence that occurred at the 1968 Democratic National Convention. The contradictions arising out of this fiasco are indicative of the times. From Wikipedia's article on the subsequent and infamous Chicago Seven trial:

The 1968 Democratic National Convention, held in late August – convened to select the party's candidates for the November 1968 Presidential election – was the scene of massive demonstrations protesting the Vietnam War, which was at its height. Thousands of people showed up with signs and banners, music, dancing and poetry. A pig, "Pigasus the Immortal", was brought into the city to be "nominated" for President. Initially, there was a carnival atmosphere. The police were edgy. Some people responded to a night-time curfew announcement with rock-throwing. Police used tear gas and struck people with batons, and arrests were made. In the aftermath of what was later characterized as a "police riot" by the U.S. National Commission on the Causes and Prevention of Violence,[1] a grand jury indicted eight demonstrators and eight police officers

The NCCPV did indeed characterize this incident as a 'police riot.' That didn't prevent them from making the following bizarre statement:

"There is a criminal justice process through which each offender passes from the police, to the courts, and back unto the streets. The inefficiency, fall-out, and failure of purpose during this process is notorious."

Frickin' weird - it makes it sound like all the protesters were repeat offenders -hardened political criminals who could have been prevented from their opposition to the Vietnam War if only they'd been left behind bars. 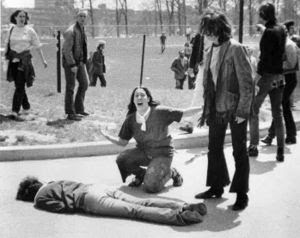 Fast forward to May 4th, 1970, the massacre of four students at Kent State University in Ohio. I've blogged before about this dark day in American history. Reading about this still makes me sick to my stomach, even almost 40 years later.

Four students were killed and nine others were wounded, one of whom suffered permanent paralysis.

Some of the students who were shot had been protesting against the American invasion of Cambodia, which President Richard Nixon announced in a television address on April 30. However, other students who were shot had merely been walking nearby or observing the protest from a distance.
[...]
Killed (and approximate distance from the National Guard):

Consider those distances relative to something familiar: a professional ballpark. 343 feet would be a home run in left or right field in many parks, 390 and 382 would clear the fence even in deep center. How does this threaten armed and helmeted National Guard troops? Even at 265 ft a professional outfielder is not going to throw a baseball directly to home plate for an out, but will relay it in. So the idea of 'rock-throwing radicals' just doesn't hold water.

Students had been bayoneted by troops on the two days before the shootings. That's right, BAYONETED! Fucking unbelievable. Barbaric.

Just like the Chicago 'police riots', a subsequent government investigation (this one was called the Scranton Commission) found the armed authority figures in uniform to be at fault.

The Commission issued its findings in a September 1970 report that concluded that the Ohio National Guard shootings on May 4, 1970 were unjustified. The report said:

Even if the guardsmen faced danger, it was not a danger that called for lethal force. The 61 shots by 28 guardsmen certainly cannot be justified. Apparently, no order to fire was given, and there was inadequate fire control discipline on Blanket Hill. The Kent State tragedy must mark the last time that, as a matter of course, loaded rifles are issued to guardsmen confronting student demonstrators.

Just like the Chicago 'police riots', the armed authority figures in uniform suffered no consequences for their actions, even though this time it descended to the level of cold-blooded murder.

Eight of the guardsmen were indicted by a grand jury. The guardsmen claimed to have fired in self-defense, which was generally accepted by the criminal justice system. In 1974 U.S. District Judge Frank Battisti dismissed charges against all eight on the basis that the prosecution's case was too weak to warrant a trial.

In May 2007, Alan Canfora, one of the injured protestors, demanded that the case be reopened, having found an audiotape in a Yale University government archive allegedly recording an order to fire ("Right here! Get Set! Point! Fire!") just before the 13 second volley of shots.

Flash forward again to the 2004 RNC in New York City. The NYPD are under investigation (since May 17, 2006) alleged to have systematically infringed on protesters' constitutional rights. Democracy Now! is the go-to place for this story, which has received far too little attention.

During the week of the 2004 convention, police arrested some 1800 protesters—more than at any previous political convention in the country’s history. It is unclear as to the extent of the Justice Department"s criminal investigation of the NYPD, but the FBI appears to be focusing on the arrest of Dennis Kyne, a Gulf War veteran turned anti-war activist. Kyne was arrested on the steps of the New York Public Library on multiple charges including inciting a riot. His case went to trial but it was dismissed after his legal team presented videotaped evidence that proved the police lied to the court. As part of the criminal investigation, the FBI is seeking to interview other protesters whose constitutional rights have been violated by the police.

The bottom line of this story is that the investigation into police wrongdoing didn't even begin until nearly two years after the events, so the memory of witnesses can be put in question and the prospect of getting any physical evidence is pretty much shot. It appears that the investigation would never have started at all if it hadn't been for the existence of the video tape proving that the NYPD were lying about this from the get-go.

Not that the effort has been without any fruits, as you can see by searching Democracy Now's archives. Here's two short samples and one longer one:

Mar. 23, 2006: NYPD Caught Lying About RNC Arrests in 2004
"For the first time a high-ranking police supervisor has admitted that police arrested about 400 people around Union Square even though the police never gave an order to disperse."
Mar. 26, 2007: Report: NYPD Conducted Widespread Spy Campaign Before RNC
"The New York Times has revealed that undercover New York City police officers traveled around the country, Canada and Europe to spy on protesters planning to attend the 2004 Republican National Convention. The city set up an “R.N.C. Intelligence Squad” and sent undercover officers to attend meetings of political groups, posing as sympathizers or fellow activists."

May 17, 2007: NYPD Forced to Release RNC Spy Files
A federal judge has ordered the New York City police to release about 600 pages of internal documents that detail the department’s wide-ranging surveillance of activists ahead of the 2004 Republican National Convention. The judge ordered the first batch of documents to be made public following a lawsuit by the New York Civil Liberties Union and the New York Times. Donna Lieberman of the NYCLU: “What’s shocking is the breadth of the surveillance activity. They were in lots of different cities across the nation and internationally. We have in here of people doing grafitti in Germany in Croatia,. We have reports from Berkeley, from Baltimore, from Syracuse, from Fresno. The police department was all over the country, all over the globe.” The city is still fighting to keep secret other documents related to the convention including the raw intelligence collected by the police department.

Not entirely without fruits, and yet completely devoid of the sweet ripe fruit that protects civil liberties going forward, into say the next Republican National convention following the one in NYC in 2004. No cop has been disciplined. Ray Kelly is still New York's Police Commissioner. All costs of the investigation and its result have so far been borne by the New York taxpayer. And unless some consequences are felt by those who conspire to deprive their fellow citizens of their liberty, the erosion of constitutional rights will continue.

Some Joni Mitchell lyrics came into my head while I was writing this. From Judgement of the Moon & Stars, they were written about Beethoven's deafness, but oddly could just as well been referring to the Bill of Rights. I take poetic license in my reinterpretation.

Revoked but not yet cancelled
The gift goes on/ In silence/ In a bell jar
Still a song ...
You've got to shake your fists at lightning now
You've got to roar like forest fire
You've got to spread your light like blazes
All across the sky
They're going to aim the hoses on you
Show 'em you won't expire
Not till you burn up every passion

Not even when you die
Come on now/ You've got to try
If you're feeling contempt/ Well then you tell it
If you're tired of the silent night
Jesus, well then you yell it
Condemned to wires and hammers
Strike every chord that you feel
That broken trees/ And elephant ivories/ Conceal

UPDATE: The Station Agent has the scoop on the arrest of Democracy Now's Amy Goodman.