Gonzales Was Oblivious To Politicization At DOJ: IG

Former Attorney General Alberto Gonzales knew essentially nothing about the partisan culture and violations of federal law that were routine at the agency under his watch.

That's what we heard today from Glenn Fine, the Department of Justice Inspector General.

Fine told lawmakers on Capitol Hill today that his investigators interviewed Gonzales for their report, which found numerous senior officials were illegally using partisan considerations when hiring some prosecutors and judges. 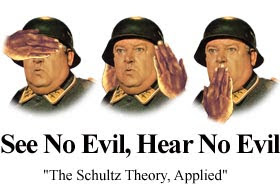 One might observe that Gonzales is like that Hogan's Heroes character, Sergeant Schultz, "I see nothing. Nu-u-u-thing!"

But that would be unfairly letting Gone-z0 off the hook. The fact of the matter is he expanded Goodlings hire/fire powers dramatically through an 'unpublished' (read 'secret') memo. From Wikipedia:

Also, from the same Wiki article:
" Goodling worked alongside Tim Griffin as an opposition researcher for the Republican National Committee during the 2000 presidential campaign. " - that's as partisan a position possible even for somebody who's job is completely in the party, not the government.

Finally, Goodling's title at the time was White House Liaison. Even putting aside the issue of partisanship, Gonzales should have had an affirmative duty to maintain the independence of the Department of Justice. There was an impropriety in just giving that much power to someone with close ties to the administration. No way can you say that Gonzales, with his own ties to George W. Bush, didn't know exactly what he was doing. 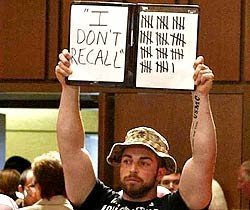 And lest we forget, when Alberto Gonzales testified about the US Attorneys' Purge last April, he claimed to have amnesia no less than 74 times. And that was on just one day of testimony. Let's have Alternet refresh our memories:

When asked about the decision to fire eight federal prosecutors, Gonzales insisted he wasn't involved, then after e-mails about meetings he attended were released, okay, maybe he was involved. But just a little. Microscopically. An eensy teensy teeny wee bit of a tad. He did admit to making the decision to fire the US Attorneys but couldn't remember when he made the decision. Seems to be a perennial theme with this administration. "Had absolutely nothing to do with it. Oh, you have evidence? Nope. Sorry. Can't remember. Its all a blur."

At the hearing, Senators accused Bush's torture champion of being dishonest, deceitful, incompetent, evasive, inept, underhanded, misleading, smelling like rancid olive loaf and looking like he's wearing his father's burial suit. Not to mention scaring small children with a high squeaky voice that over broadcast airwaves has been known to activate smoke alarms, lawn sprinklers and TIVO recordings of Gladiator movies. And those were the Republicans.

The Sgt. Schultz defense just doesn't cut it here. That one of the most loyal of Bush loyalists gave unprecedented power to another Bush loyalist - who wasn't even qualified for the position she occupied - and didn't know exactly what was going to happen, simply strains all credibility. One really has to question how capable an Inspector General Glenn Fine is. He's sure doing a heckuva job.