On the Road to His Time Horizon 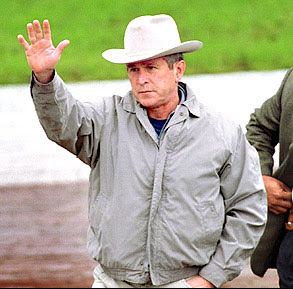 Rhinestone Cowboy diplomacy has finally boxed the President in. After demonizing Democratic efforts, such as they were, to establish a timetable for getting out of Iraq ever since he got us into Iraq as a "date certain for surrender", Bush now faces an emboldened Iraqi Prime Minister who finally found his political footing. If I didn't know that the surge was a mirage based on buying off berzerkers in certain regions and fostering truces in other areas where the players are perfectly happy to wait us out and kill each other later than sooner, I would say that maybe the surge worked too well for the Bushies because, as blogger Juan Cole of Informed Comment told Air America's Rachel Maddow on Friday, it allowed Nouri al-Maliki the time he needed to make the transition from anti-Saddam conspirator to national leader with the full confidence in his own ability to direct the military to serve his ends.

Bush wants Al-Maliki to get the leaders of Iraq to sign off a new troop agreement that would serve the dual purpose of legitimating his invasion of Iraq as well as make it difficult for Barack Obama to end the occupation should he win the election in November. The problem is, Bush and John McCain have long maintained that they would listen to the Iraqi government if it told them that they wanted American troops to leave the country.

Instead of alienating the Iraqi people who apparently hate us like poison, Iraq's leaders are refusing to sign the agreement unless there's a time table for withdrawal.

So, to make matters easier for Iraqi leaders Bush's speechwriter came up with some word melding of epic proportions.

On Friday the White House released this nugget:

In the area of security cooperation, the president and the prime minister agreed that improving conditions should allow for the agreements now under negotiation to include a general time horizon for meeting aspirational goals.

Clearly this statement means nothing and the White House hopes that Iraqi politicians are stupid.

Then yesterday an interview Al-Maliki did with German magazine Der Spiegel was released that revealed his approval for Barack Obama's 16-month timetable for withdrawal.

How bad is this for McCain?

Mark Ambinder of The Atlantic fields that question:

(Via e-mail, a prominent Republican strategist who occasionally provides advice to the McCain campaign said, simply, "We're fucked." No response yet from the McCain campaign, although here's what McCain said the last time Maliki mentioned withdrawal: "Since we are succeeding, then I am convinced, as I have said before, we can withdraw and withdraw with honor, not according to a set timetable. And I’m confident that is what Prime Minister Maliki is talking about, since he has told me that for many meetings we’'ve had."

That's okay, you guys were fucked already. TPM has more on the response to Maliki's statement from both campaigns.

Making matters worse for them--and no, it can't really get worse--Gordon Brown piled on with his support for Obama.