It's the Stupid Economy 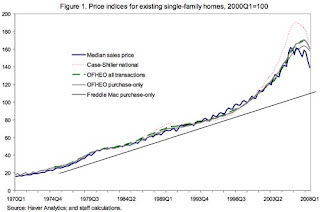 Y'all know I don't do 'blink and link' blogging as a rule, but this post from ascap_scab at Reconstitution 2.0 deserves a look-in by all unrulies. Scabbers has done a fair bit of work on this, and documents the imminent collapse of the economy better than I've seen elsewhere. In fact Jolly Roger and his crew at Reconstitution do a fair bit of econ blogging, so I consider it a go-to site in that area.

When the dust finally settles on the Bush administration the smarter historians will look back at debacles such as the Iraq war, the gutting of the Constitution, the purging of the Department of Justice and such not just as crimes unto themselves. They will hopefully twig to the fact that all of the above were really committed to enable a much larger and more heinous crime - the transfer of America's wealth from the middle class into the hands of a tiny group who were obscenely wealthy to begin with. And while the chances of anyone ever being held accountable for all of these other crimes is slim to none, the chance that this wealth will ever be refunded to the thousands who have lost their homes, their jobs and their dignity is exactly zero.

Any bank robber would guess that the job gets easier if you have a guard on the inside in your pocket, even easier if you've also co-opted the cop that's most likely to respond to the alarm. the Bush crime syndicate has co-opted the entire federal government for Pete's sake! And they're wasting no time scooping up everything they can while they can. It's no co-incidence that all these bank failures are happening in the last months of Dumbya's term.

If the average American had any idea how directly Bush policies were aimed at sucking the last dollar out of his or her wallet, there would be massive riots on the streets of every city, town and village in the country. Get over to JR's place for a good read. Prepare yourself to be enraged.