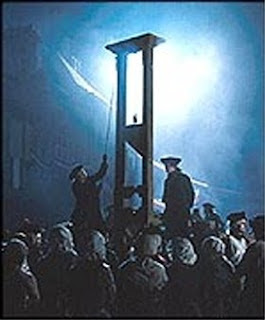 And why would we at Les Enragés.org be celebrating a French holiday? I'm glad you asked.
From the sidebar at Sans-Culotte.org:

sans-culottes translates literally to 'no breeches'. The name was chosen by the working class French Revolutionaries (you know, the "off with their heads" crowd) opposed to aristocracy who triggered what would eventually end dynastic rule across Europe. Les enragés (angry ones) were a distinct group of sans-culottes.

We are that 'off with their heads' crowd. OK, some of us don't mean that literally, being opposed to the death penalty and all, but I for one have observed that heads WON'T roll when they're stll attached to necks. Hence the guillotine logo.

Proper forms of celebration include but are not limited to drinking copious amounts of white wine with a delicious Quiche Lorraine, while watching the Bastille Day fireworks. What? You used up all your fireworks over a week ago? Shame on you! 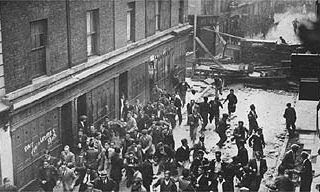 Once you've got a belly full of good wine and quiche, you might feel the urge to hit the streets with torches and pitchforks. While this would be decidedly unruly, such activities should be confined to fairly sizable mobs. There is after all safety in numbers.

Some time ago I reminded all of you that Democracy is NOT a Spectator Sport. History has shown that desperate times call for desperate measures, and sometimes, quite often in fact those desperate measures can be effective. Rise UP!! You have nothing to lose but your chains.


Governments are instituted among Men, deriving their just powers from the consent of the governed, --That whenever any Form of Government becomes destructive of these ends, it is the Right of the People to alter or to abolish it, and to institute new Government, laying its foundation on such principles and organizing its powers in such form, as to them shall seem most likely to effect their Safety and Happiness.

Rise Up!
I leave you with just a few revolutionary quotes. Courage, mes enfants.

"We are not to expect to be translated from despotism to liberty in a feather-bed."
-- Thomas Jefferson to Lafayette, 1790 --

Free people, remember this maxim: we may acquire liberty,
but it is never recovered if it is once lost.
-- Jean Jacques Rousseau --

"It does not require a majority to prevail,
but rather an irate, tireless minority
keen to set brush fires in people's minds."
-- Samuel Adams --

"What the founders intended was for ordinary Americans, ordinary people
to assume the patriot's task and lead the fight to restore democracy,
and to see themselves as leaders."
-- Naomi Wolf --

Email ThisBlogThis!Share to TwitterShare to FacebookShare to Pinterest
Labels: Activism