Thanks for the Support

In honor of the 5th anniversary of our national commitment to supporting Bush's foreign (oil war) policy, a moment of song...

I'm a fan of Roy, and it's always nice to hear people put music to things that have been on my mind; it's something else to hear it done so well.

Just this morning, I learned that in 29 Palms, California, a SUPER BOOSTER military town, there is a growing peace movement. Now there's a little bit of reality I'd like to see broadcast far and wide, it sitting next to the largest marine corps base in the world and home to hundreds of retired military officers. I mean, this is a town where only a few years ago, stating that "Bush is killing our troops" made local news coverage, caused one's car to be vandalized, and resulted in the loss of employment with the city. 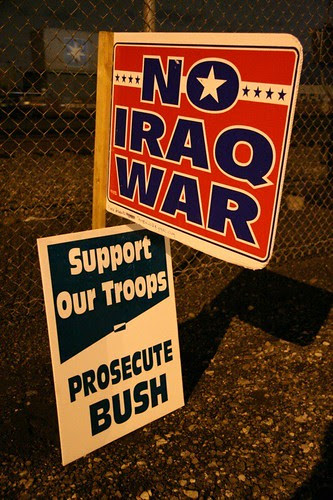 Speaking of broadcasting anti-war movements, thanks to the corporate media, I never realized that...

We've already, in both the lead up to this war and since the war in Iraq has been going on now for five years, we've already had demonstrations that equal in size all but perhaps one of the anti-war demonstrations during Vietnam, and that was April 24th from 1971.

And since we don't see it broadcasted by corporate media, it's as if it never happened...

I confess, I liked Zimmerman's jab at the Democratic led congress, which has given more support to Bush than I had dreamed possible. Got me thinking about the way congress has failed to support the very Constitution that our military is supposedly dying to defend. Nice rub there.

And, I've been ruminating on the way the Bush Beasts stage, film, and broadcast whatever reality they want us to consume, props and all. "You showed up on Thanksgiving with a turkey and a camera crew." They keep dishing it up, and we keep eating it.

During this election season, I think we must all be on the lookout for more acts of the Ministry of Make Believe, forever glamorizing, patriotizing, codifying, godifying the "war" in Iraq.

We need to see reality clearly.

Who is going to open the windows and let the smoke clear?
Who will break the mirrors?