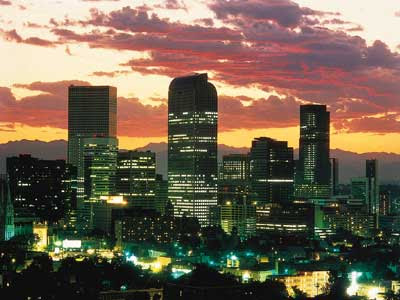 The last time the Convention was held in Denver was 1908 - yep, 100 years ago. It's a very different town today.

So much demand, so little space. That's the position that the City of Denver finds itself during the days of the Democratic National Convention, Monday August 25th- Thursday August 28th.

It's truly an International event, and with the Convention itself tying up many resources there's a stiff competition for the remaining venues. In order to make it as fair as possible, the City decided on a lottery process vs. making selections on its own. So this past Wednesday, there was the lottery-that-was-not-PowerBall, and lo and behold, it turned out to be controversial.

Jared Jacang Maher was at the lottery itself, and I encourage you to read his take. Here's a snip that I want to draw attention to though:

When it came time for the Civic Center drawing, the R-68 representatives became noticeably edgy. Their group’s relevancy as an umbrella organizer for leftist protests hinges on their holding park permits. Central to their plans is the Civic Center, which they hope to fill with booths, food, demonstrations and a possible free concert toe entertain the tens of thousands of protesters that they insist will show up. But when longtime activist Barbara Cohen marched up to the table to inspect the cards, she found R-68’s missing from the line-up. Officials insisted that it was a simple mistake, and scrambled to search their records. (Emphasis mine)

You know why they appeared, and probably are, edgy? They already assume that Civic Center park is theirs.

Here's the location under discussion:

It's worthwhile to keep 2 things in mind; 1 - the Park, for all applicants, is only available the 25th and 26th, 2 - it's SMACK IN THE CENTER OF TOWN. It's literally a choke point for the entree to Downtown.

I think Recreate '68 is up to no damn good. I think if they were awarded 1 day, they still want to bogart that park, my friend. That's just my opinion/hunch.

Anyway the Convention should have protesters. It should be free, fair and peaceful for everyone. Somehow, I'm thinking that it's not going to work out that way. The do-over for the lottery is today, and I'll update this post when there is news.

The madness starts 158 days from today.