Deport Me or Kill Me; You Decide 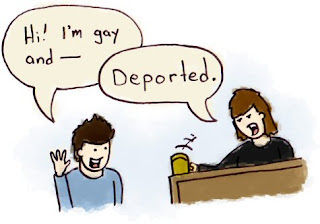 Evidently Pam of Pam's House Blend started reporting this, then TeddySanFran did, which is where I got wind of this today.

I'll just go right to TeddySanFran who encapsulizes my reaction:

We who warn stridently that the right-wing's private army squads might sometime come for any of us in the night are often mocked: "That can't happen here!" Somehow, we are reassured, American values wouldn't allow it.

But who defends values loudest in America? Who do the media go to when looking for values validation? Who does the White House invite in for chats? Tony Perkins of the Family Research Council.

Watch these words come out of his mouth yourself:


While "Bomb Bomb Bomb, Bomb Bomb Iran" is a little higher on the Wingnut Top 40, the above little gem ain't far behind. TeddySanFran rightfully goes on in his post at FDL to challenge McCain, to which I say bravo. But when I dug a little further, I found SlapUpsideTheHead, who informed me of a Canadian deportation of a gay-man political asylum case, a little over 2 weeks ago. Alarming to me.

I have recently brought up that political science concept of the "Overton Window" and I see it at work all the time and every day these days. Small, tiny nibblings at the whole truth, so that only a part of the continual political shifting is seen. A small Overton refresher so you needn't have to click out:

The degrees of acceptance of public ideas can be described roughly as:

And someone who describes the entire process of forced gay deportation and the ultimate gay holocaust is Pierre Seel. A portion of a review of his book:

After years of anguished silence, French-born Seel came out of the closet in 1981 at the age of 58 to bear witness to the Nazi deportation of homosexuals during WWII. In this brief, powerful memoir, he recalls the details of his arrest and torture by the Gestapo and his horrific experiences at a concentration camp in Alsace, where homosexuals were the most despised of prisoners. Inexplicably released in 1941, he was drafted into the German army, saw action on various fronts and managed to survive the war. Convinced by a priest that he was in a state of mortal sin, Seel set out to eradicate his homosexuality, keeping silent for years about his "pink triangle" past. But in 1981, outraged by a prominent bishop's characterization of homosexuals as "sick," he became inspired with a sense of obligation to obtain recognition for what had happened to some 350,000 homosexuals during the war, and his public statements became a cause celebre in France. Seel remains active at 72 in his personal crusade, publicly airing the long-overlooked tragedy of the homosexual holocaust. His account of his suffering and his plea for justice are heartrending in their dignified restraint.

Need more hearts be rended, no matter to whom they belong?

I say, that the logical and following step from deportation is death. That is exactly what the most reprehensible fascist regime ever known, the Nazis, did in WWII. Start here at page 54 "The Curbing Of Nazi Deportation Plans, January - February 1940" until you read enough to see that since mere deportation was expensive, futile, and a nuisance that outright murder was better, and ultimately the final solution. Applied equally to everybody who was not wanted by that regime.

But today, exactly how do they know who is gay, and who should be deported? It is by violating our privacy rights, of course. That's why I am so passionate about FISA, aside from the obvious First Amendment connections.

Regarding FISA, none of the remaining candidates for president are really good. None of them. None are on record as voting against this current nasty regime's position. None of the 3 have voted against FISA with immunity or basket warrants. By their official vote record, none have opposed the machinery of the state to violate YOUR privacy, whether you're gay or not.

Which brings me to Niemoller, who long time readers of this blog will recognize his words if not his actual name:

When the Nazis came for the communists,
I remained silent;
I was not a communist.

When they came for the Jews,
I remained silent;
I wasn't a Jew.

When they came for me,
there was no one left to speak out.

So deport me or, if you find it too expensive or futile, kill me. If by chance, you become unpopular with the next regime, no matter to which candidate it belongs, you could be next.