Yahoo! and MSN: partners in oppression. 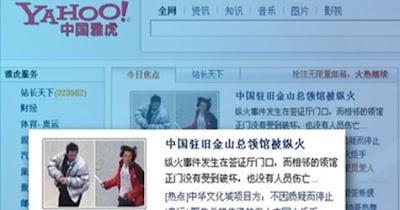 Yahoo! and MSN are helping the Communist Chinese dictatorship track down Tibetan protesters, who, if caught, face terrible consequences at the hands of the regime:

From The Observers (France 24): Yahoo China pasted a "most wanted" poster across its homepage today in aid of the police's witch-hunt for 24 Tibetans accused of taking part in the recent riots. MSN China made the same move, although it didn't go as far as publishing the list on its homepage.

The "most wanted" poster has been published on several Chinese portals like Sina.com and news.qq.com. It reads "The Chinese police have issued a warrant for the arrest of suspected rioters in Tibet" and provides a phone number for informants to use in total anonymity. Along with the text are photos of Tibetans taken during the riots. Of the 24 on the list, two have already been caught.

Yahoo's human rights values have been under fire since it was revealed that the company helped the Chinese police in its inquiry over the journalist Shi Tao, who had an email account with Yahoo. He was sentenced to ten years in prison in 2005 for "divulging state secrets". After that case, it was also found out that Yahoo had provided evidence against at least three other Chinese dissidents. Following the allegations, the company had to offer an explanation to the American congress. It defended itself by explaining that the management of its operational arm in China had been delegated to Alibaba.

China, which has blocked access to YouTube since the beginning of the riots, is known for having a sophisticated censorship system when it comes to the internet. This event shows that the Chinese authorities are also using the web to root out their opponents, and once again,with the help of a foreign company.


This is outrageous stuff. But typical. Google has been kowtowing to China for years now, allowing their search engine to be cenosred. Be truly UnRuly. Don't use them. Ever. Again. And while you're at it, can somebody lead us (me) to a search engine I can use with a clear conscience?