Blast from the past; last June that is...

From Last June, PRIOR to the FISA vote by Obama.

Let's just have a look: 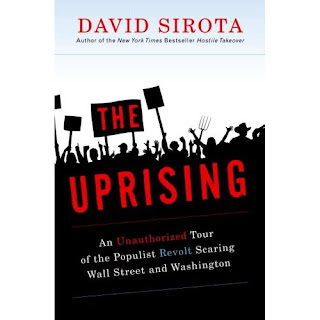 "David Sirota is a clear-headed and principled hell-raiser for economic justice. More like him and we'll have a real uprising on our hands. "
—Naomi Klein, author of "No Logo" and "The Shock Doctrine"

Do I have your attention, Mob? Good, I thought so.
I saw this on Amy Goodman's "Democracy Now!" show last night. I am a latecomer to David Sirota. He has been blogging on Squarestate.net which is a major Colorado progressive blog, (credentialed to the DNC by the way) and I always thought he was interesting, but I had never dug fiercely into him before. Last night's show had me absolutely riveted.
You can watch the whole show here, but I have excerpted a couple of points:

His observations about Obama, the political process this cycle being the "starting point, not the end point" and further observations about "direct action" making Wall Street and K Street "scared" are just music to my ears. Literally.
Just listen to what he says about the Iraq War. We've been saying it for the longest time!

DAVID SIROTA: Right. What happened, in the chapter that I reported on the antiwar movement, is back in 2007, what we found is that you just had an election where the Democrats were elected promising to end the war, and what ended up happening was that the same Democratic Congress refused to really do what it takes to actually end the war. And part of that was, I think, a strategic decision on behalf of the antiwar organizations in Washington about how they said we could end the war. You had consultants who were simultaneously being paid by the Democratic Party and Democratic Party politicians.

DAVID SIROTA: You had Hildebrand Tewes. You had consulting firms. They were the lead consulting firm. And I don’t mean to pick on them. It’s just that they were the consulting firm that was heading up the major coalition in Washington of antiwar groups. And so, the strategy that came out of those antiwar groups was we have to simply bash the Republicans to end the war, when in fact, of course, Congress was controlled entirely by Democrats. Last I checked, Democrats have forty-one senators in the US Senate, if they wanted to filibuster a bill to continue funding the war [sic-they could]. They haven’t done that. Yet the strategy kept saying, well, we have to only focus the ads, the media buys and the pressure on Republicans. It was sort of a dishonest strategy, and I think it had something to do with the fact that you have organizations in Washington that put partisan affinity over movement goals. [emphasis mine]

He is totally speaking our Unruly Language, I do believe. The part about sneaking into the Exxon Shareholder meeting is GREAT!
Watch the whole show, (Sirota's interview starts at 30 minutes into the stream) and buy the book. I have never EVER said buy something before on this blog, but I'm telling you I am buying it, and from what I saw of the interview, Sirota's insights into the whole political process and "direct action" really speak to what we as the Unruly Mob hold dear.

Are we really anywhere different than this point from last June? I say "No, we're not." Do you?

Observe with scrutiny from 2:00 in the video. [Observe with a harsh eye, and you tell me that it hasn't worked out better for the corporations than for you or me.] Up until 2:45.

There was simply no choice last summer/fall. There is no way I or anyone I know or trust would have voted McCain/Palin.

But what do we do now?

Personally, I don't care to punt.

TAGS: Democracy Now!, David Sirota, "Uprising", Let's Do Something Besides Blog, Unruly, Uprising, I'm Not surprisd one fucking bit by what has happened, are you?