Do Not Lie To Me About These Fucking AIG Bonuses 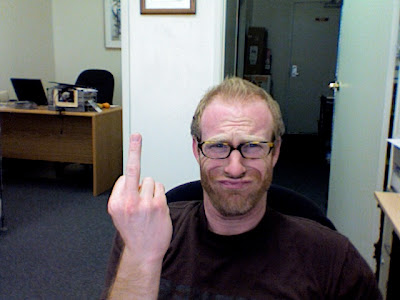 The fastest way to piss me off is to out-and-out lie to me. I mean Lie. Lie, lie, lie. Prevaricate. Say something you know to be untrue. And that's what's going on right now about these AIG bonuses and from the Obama Administration! Via Jane Hamsher at FDL:

Language from the Senate bill, written by Dodd:

(4) a prohibition on such TARP recipient paying or accruing any bonus, retention award, or incentive compensation during the period that the obligation is outstanding to at least the 25 most highly-compensated employees, or such higher number as the Secretary may determine is in the public interest with respect to any TARP recipient;

(a) In General- Notwithstanding any other provision of law or agreement to the contrary, no person who is an officer, director, executive, or other employee of a financial institution or other entity that receives or has received funds under the Troubled Asset Relief Program (or ‘TARP’), established under section 101 of the Emergency Economic Stabilization Act of 2008, may receive annual compensation in excess of the amount of compensation paid to the President of the United States.

Dodd's version prohibited TARP recipients from paying out bonuses, retention awards or incentive compensation to the 25 most highly compensated employees. It also prohibited any employee of a company receiving TARP funds from making more than the President. Both provisions would have been in effect so long as a company was receiving TARP funds. Since AIG just paid out $1 million in bonuses to 73 employees, Dodd's version limiting all employees to what the President made (roughly $500,000) would have substantially nipped that in the bud.

In fact, the Wall Street Journal makes it entirely clear. From Jane again and the WSJ:

The most stringent pay restriction bars any company receiving funds from paying top earners bonuses equal to more than one-third of their total annual compensation. That could severely crimp pay packages at big banks, where top officials commonly get relatively modest salaries but often huge bonuses.

As word spread Friday about the new and retroactive limit -- inserted by Democratic Sen. Christopher Dodd of Connecticut -- so did consternation on Wall Street and in the Obama administration, which opposed it.

Who pushed back against Dodd, and told him to neuter the provision? The WSJ says Geithner and Summers:

The administration is concerned the rules will prompt a wave of banks to return the government's money and forgo future assistance, undermining the aid program's effectiveness. Both Treasury Secretary Timothy Geithner and Lawrence Summers, who heads the National Economic Council, had called Sen. Dodd and asked him to reconsider. [emphasis Jane's]

Jane's post documents this sequence of events without any possibility for doubt. The debate that took place over limits on executive compensation for bailout-receiving companies only occurred six weeks ago, and it is all documented in the public press. Dodd was the one fighting against the White House in order to apply the prohibition to all bonus payments, i.e., to make the compensation limits retroactive as well as prospective. As but one crystal-clear example that proves this, here is a February 14 article from the Wall St. Journal on the debate over executive compensation limits:

The most stringent pay restriction bars any company receiving funds from paying top earners bonuses equal to more than one-third of their total annual compensation. That could severely crimp pay packages at big banks, where top officials commonly get relatively modest salaries but often huge bonuses.

As word spread Friday about the new and retroactive limit -- inserted by Democratic Sen. Christopher Dodd of Connecticut -- so did consternation on Wall Street and in the Obama administration, which opposed it.

Can that be any clearer? It was Obama officials, not Dodd, who demanded that already-vested bonus payments be exempted. And it was Dodd, not Obama officials, who wanted the prohibition applied to all compensation agreements, past and future. The provision which shielded already-promised bonus payments from the executive compensation limits ended up being inserted at the insistence of Geithner. [emphasis Glenn's]

I'll tell you what change I can believe in; the change of employees, starting with Geithner and Summers.

Obama better clean house and keep promises or we're looking at a one-term-wonder. It's this kind of shit that Republicans eat with a goddamned spoon and it's not neccessary. Obama's administration SHOULD have said "Dodd was right, and we're inserting that language going forward." Because THAT'S THE EXACT POSITION THEY FIND THEMSELVES IN!

Why they find it necessary to pitch Dodd overboard amazes me. Connecticut ALREADY has 1 Rethug Senator named Joe LIEberman; do they want to hand CT 2 fucking senate seats?

Between the lie factor and the politics I am just amazed at the stupidity. And not a little concerned about how it's going to continue in the future. And despite all this bonus hoo-ha, Obama is still going to be painted as a SOCIALIST!

So, some cheery Socialist Music For Us Comrades: