Pink Floyd University - "On The Turning Away" 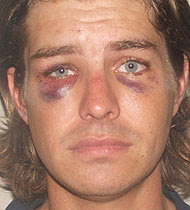 Have you ever been beaten senseless, just for being who you are?

I have. It's not a wonderful experience.

This picture is of David Graham, who at the time two years ago in 2006, was 26. He was a favorite to win the Australian version of the TV show "Big Brother" and tearfully outed himself on that program. And yep, he totally paid for it. With the beating of his life.

This is the physical version of the political version of what just happened in California with the passing of Proposition H8. In my opinion, what happened was that thugs jumped into the political process in the form of the Mormons, who mugged gay people of their previous ability and right to marry in that state.

This is the first time I can think of that rights were actually TAKEN AWAY in proposed legislation. The struggle for any groups rights have met defeat to actually gain the right sought, but never taken away to my knowledge. If someone knows of another case where that would be true, please speak up and let me know. I''d truly be interested in trying to compare the situations.

Now, let me get to why this is a Pink Floyd University Post. A snip from the lyrics of "On The Turning Away":

Which I believe is the point that RFK was really pounding during his run for the presidency. And it's fun for me that someone else has a bent that puts politics and Pink Floyd together:

I frankly do not think, as many folks have written on blogs or newspapers, or said on cable and other outlets, that it is the fault of African Americans that Prop H8 passed in California. I agree with Kathryn Kolbert of "People For The American Way," who wrote:

As a mother who has raised two children in a 30-year relationship with another woman, I fully understand the depth of hurt and anger at voters’ rejection of our families’ equality. But responding to that hurt by lashing out at African Americans is deeply wrong and offensive — not to mention destructive to the goal of advancing equality.

Before we give Religious Right leaders more reasons to rejoice by deepening the divisions they have worked so hard to create between African Americans and the broader progressive community, let’s be clear about who is responsible for gay couples in California losing the right to get married, and let’s think strategically about a way forward that broadens and strengthens support for equality.

Others have taken on the challenge of looking at the basic numbers and concluded that it is simply false to suggest that Prop 8 would have been defeated if African Americans had been more supportive. The amendment seems to have passed by more than half a million votes, and the number of black voters, even with turnout boosted by the presidential race, couldn’t have made up that difference. That’s an important fact, but when African American supporters of equality are being called racist epithets at protests about Prop 8, the numbers almost seem beside the point.

Republicans and white churchgoers, among many other groups, voted for Prop. 8 at higher rates than African Americans. There are few African Americans in the inland counties that all voted overwhelmingly to strip marriage equality out of the California constitution. So why single out African Americans? Who’s really to blame? The Religious Right. Let’s start here:

Conservative evangelical leaders who are unremittingly hostile to the rights of gay people and who put Prop. 8 on the ballot and bombarded pastors, churchgoers, and the public with lies about gay people wanting to destroy their religious liberty and come for their children — even suggesting that Christians would be thrown in jail if Prop 8 passed.

Mormon Church leaders who turned Prop. 8 into a national religious crusade against gay couples, badgered Mormons nationwide to give heavily to the campaign, and recruited thousands of footsoldiers for door-to-door canvassing (special kudos to the courageous Mormons who challenged the Church leadership)

Conservative Catholic leaders who betrayed Catholic teaching about human dignity by enthusiastically joining forces with campaign organizers who portrayed supporters of gay equality as evil and satanic. “Yes on Prop 8” leaders whose view of the campaign as a battle between good and evil led to an “ends justifies the means” campaign that included grossly distorted ads, mailings, and robocalls directed at African Americans and falsely portrayed Barack Obama as a Prop 8 supporter.

There will be plenty of post-game analysis of the No on 8 campaign’s choices and strategies, and that’s not the purpose of this memo. But it is clear that the Yes on 8 campaign had a far more aggressive and systematic outreach to African American religious leaders and voters. If we either take black voters for granted because they are “supposed to” be liberal, or we write them out of our campaign strategies because we label them inherently homophobic, we cannot turn around and make them the scapegoat for our failings.

I really don't think that writing out black voters for any of the reasons Kathryn stated is the way to go. Nor do I think that labeling them homophobic is they way to go either, but having said that, the black men and hispanic men that I have had for friends and lovers in the past have often bemoaned the distance that's been created in their families for their own acceptance, and in my opinion, that gulf has at least been the same, or a little greater for those men I've known. There's plenty enough homophobia to go around, and it doesn't need a particular racial home as far as I'm concerned.

Homophobia just needs to go away.

Really, don't want a gay marriage? Don't have one.

Last reminder from The Wise Pink Ones:

If you ask me, The Church Of Pink Floyd [so to say] would really be far more church-y than the Mormons and any other church folk who ran with the "Yes on 8" crowd.

Mary Magdalene was a whore if you believe the book. When I was gay bashed the first time in in 1979 [I was homeless and a easy target frankly], it was a prostitute and a transvestite who scooped me up and took me in and healed me, and then steeled me to the tough road ahead that was going to be in Phoenix at that time. That education was painful, but enduring.

At the end of the day, the day keeps on changing. I'm pretty OK with it that the battles for equality continue, as long as they actually do continue. And battle it is with the Mormons in particular and the Religious Right in general. After all, I have the whores and trans on my side.

I think that me, whores and trans are actually far more respectable at that same end of the day. After all, we're not the ones who are doing the "Turning Away."

TAGS: Pink Floyd University, Equal Rights, Ain't walking on eggshells, Why is it so difficult for people to be FAIR?