Here's an idea. If Obama wins this election, he should end the practice of subsidizing the red states with taxes collected in blue states. Reverse it even. 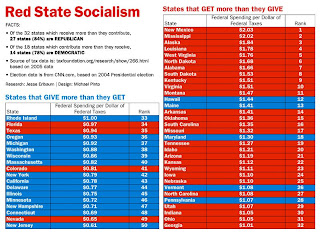 This would be so appropriate to the ideological beliefs of those voters who have supported the Republicans for decades. Since they don't believe that the less well off should be getting anything from the high income earners, and all.

So take Mississipi, who get $2.02 in federal dollars for every dollar they send to Washington, and switch them with New Jersey, who only get 61¢. Just to get the point across New Mexico, currently getting the most at $2.03, can keep that as a reward for going blue and Nevada can swap their 65¢ for Alaska's $1.84. We'll leave Louisiana alone since they're still dealing with the effects of Katrina, and swap Colorado (81¢) with W. Va. ($1.76.)

I think the Obama government should be really open and upfront about this, so the people of Idaho know that the reason they have big potholes in their highways is that they've signaled with their votes that they don't like the feds spending money on them. How can anybody complain about unfairness when the system has already been unfair under the Repugnicants, only in the other direction? In fact the red states should thank the Democrats for giving them the honor of leading the nation in fiscal responsibility.

The only problems I see are complications in developing a formula for states like Maine that vote Democratic on the presidential ticket, but still send two Repuke senators to Washington. Considerations would also have to be made for who the governor and the state legislature are, but that could all be worked out over a working lunch of pizza and beer.

If you like this idea maybe we could work on my next one - a plan to rescind the tax exempt status of every religious organization in the country. Ooooh, and a special surtax on creationist museums. And a special clause in that law that designates FOX "news" as a creationist museum, that's the ticket!

With any luck you might even get some of the most backwards states to secede. Which might put them even closer to the stone age than they already are, but it would be good for the rest of the country, you betcha.