I never thought I'd ever say this, but you GO, RUSH LIMBAUGH!! 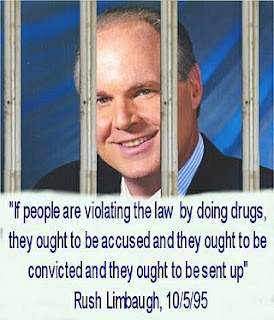 Good Riddance, GOP Moderates.
(WARNING - this is an actual link to the actual Rush Limbaugh site. Seriously, you don't want to go there.)

Here is an excerpt for those who understandably would never actually visit Rush's site. NOTE: This is the transcript of a program that ran Oct. 24, before the election.

They have just admitted that Republican Party "big tent" philosophy didn't work. It was their philosophy; it was their idea. These are the people, once they steered the party to where it is, they are the ones that abandoned it. We have noticed. Sarah Palin, by the way. Fred Barnes has a column at the next issue of the Weekly Standard about her future. Let me just give you one little pull quote from this. He asks her what her role in the Republican Party's future is going to be. She says, "I don't know what kind of role the Republican Party would want me to play." Well, make her the head of the party, for one thing! That might be a good idea. "In the past I've not been one to be considered for anything by the hierarchy of the party, certainly not in my state. In some sense, I ran against them in my party," and she's doing it again now!

This is Sarah Palin to Fred Barnes; and that, ladies and gentlemen, is why the rebuilding of the conservative movement -- even if there is no direct leader in charge of making it happen, it will happen by default because it's going to have to. Even if McCain wins, Colin Powell going to come running back? Is Bill Weld going to come running back? Hell, yes, they will! Hell, yes, they'll come running back. They'll do everything they can to stay in the circle of power. Of course they'll come running back. All these people are out for self-interest. That's what Sarah Palin is saying. She's not in it for self-interest. The party had better be what the party is or I don't have any future in it.

We're going to rebuild it even if McCain wins. We're going to have to. These people, these moderates who wanted the big tent, they have taken the party exactly where they said they wanted it to be -- and when it got there, these little cowards jumped the ship! I have lost all respect for these people. And, folks, when I said at the beginning of this that I wanted to turn around and pat myself on the back, it's because I (and so many like me) knew this exact thing was going to happen and tried to warn people about it during the primaries and so forth. I am not happy it's happened except for one reason. We flushed 'em out. We found out they're not really Republicans and they're by no means conservatives, and now they're gone. Now the trick is to keep 'em out.

IF - you exclude everyone in America that doesn't buy into your far-right cigar-chomping bullshit.

AND IF - you convince enough of the more influential Republicans to join you in your disdain for the center, the center-right, the moderates, the reasonable - IOW most of the public.

THEN - you will doom your party to decades of political obscurity and increasing isolation. Your best hope for survival will be to all move to Utah, then secede from the union.

So by all means GO FOR IT RUSH. I'm sure the results will be very entertaining. Not that Mr. Limbaugh is alone in the opinion that the Republican party has to move even further to the right. More on that here and here. Some, indeed many of these wingnuts would have advised the Titanic's captain to turn around and ram the iceberg again, only harder. After all the ship is unsinkable, right?

And, while we're on the subject of Reight-wing talk radio anyway...

RFK Jr. - "How the US News Media Fails Us"
TAGS: Rush Limbaugh, Calling him scum is an insult to scum, Reight Wing Bullshit, Media Bias