Who Are The Enemy?

...A Rant in Three Parts 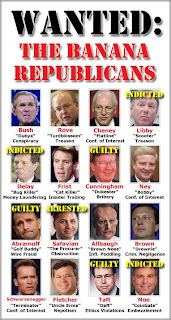 OK, full disclosure. I am still not over the repeated failure of the United States to fully restore the Great Writ of habeas corpus, allegedly suspended with the odious enactment of the Military Commissions Act (aka Torture Bill, I call it the War Criminals' Protection Bill.) I've been Beyond Outrage since long before it was even passed - it represents the greatest threat to freedom America has ever faced, including both World Wars and the USA PATRIOT Act, also an abomination. It just makes me want to hurl, but I can't deal with the mess, so I'll just rant.

Part One:
So, I was over at Matthew's blog (The Pansy Bastard) and he was trying to elicit some thoughts on how to go about the restoration of Constitutional rule of law in America, and something twigged. The larger context was a lament about the lackadaisical pace towards the impeachment proceedings that the majority of Americans long for, but it was this quote that got me thinking,

If I recall, Lincoln suspended habeas corpus,
and the SCOTUS later shot it down.

It's important to remember that SCOTUS did indeed rule against Lincoln's suspension of habeas. In consideration of that, I came up with this (hopefully) interesting (perhaps) legal argument:
I think a forceful lawyer could make a damn good case of it anyway. (more in comments) But it is not likely to happen.

Part Two:
Even assuming that the Democrats regain control of the government next year - White House, House and Senate - no-one is likely ever to be charged with willfully depriving people of their rights. It will probably take months, maybe years to even begin to restore the functionality of the Department of Justice. The damnably partisan and ideological Department of Just-Us. It will take DECADES, and a number of deaths or resignations to restore the Supreme Court. The damnably partisan and ideological and appointed-for-life Supreme Court. And there would be cries of "Ooooh - Political Witch-hunt!" from the army of flying monkeys in the damnably complicit Corporate Media, which may never be restored. 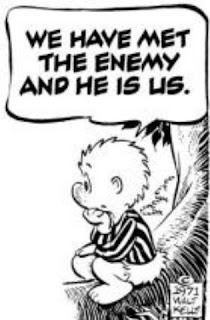 "Treason against the United States, shall consist only in levying war against them, or in adhering to their enemies, giving them aid and comfort. No person shall be convicted of treason unless on the testimony of two witnesses to the same overt act, or on confession in open court."

The framers should have done a better job of writing this article so that the Constitution protected itself from the kind of conspiracy that led to the USA PATRIOT Act and the Military Commissions Act. Because the United States isn't just a piece of geography, and it certainly isn't defined by whatever idiots, goons, or thugs happen to be in office at any given time. It is defined by what George the Execrable has called, "that damned piece of paper." Acts against that piece of paper should be construed as acts against the country itself, IMO. That would clearly and unequivocably answer the question, "Who Are The Enemy?" The enemy are George Bush and his hideous minions. Especially his partisan SCOTUS appointees.

In my mind it is treason, but in law not so much. It is a criminal conspiracy, but one that involves the President and his loathsome Vice, the legislature (especially but not exclusively the Republican side of the aisle), and the President's (and his father's) Supreme Court appointees. How are you ever going to justify going after them all? What kind of conniption fits are the flying monkeys of FOX "news" and The Washington Times, etc. going to have over it? *envisions Bill-O's head literally exploding all over Coultergeist's little black cocktail dress* HA!

Part Three:
I really love the US Constitution, but it has its flaws. Beyond the specific lacuna mentioned above, there is a general flaw that permeates the whole document as I see it. Its great strength is that, unlike most legal systems that concentrate on limiting what the people can do, it limits what the government can do. As an advocate of unruliness I like that - the more limits there are on government, the fewer rules there need be on the people. But here's the thing - while laws written to limit ordinary citizens' actions invariably contain pre-defined penalties, laws limiting government seldom if ever do. Take a quick look at the Bill of Rights. Where does it ever mention any penalties?

Let's illustrate with an example, beefing up the first amendment just a tad. My additions in red (as if you needed to have them pointed out.)

"Congress shall make no law respecting an establishment of religion, or prohibiting the free exercise thereof; or abridging the freedom of speech, or of the press; or the right of the people peaceably to assemble, and to petition the government for a redress of grievances." And if you even try, you're clearly not fit for any public office in this country. You got your position through fraud and swore an oath under false pretenses. Give back every cent you ever received in government service, forfeit any pension you were promised and begone. BEGONE, I say! And don't you DARE try to slink back. And while you're at it, wipe that silly smirk off your face. SHAME ON YOU!

The legal encyclopedia American Jurisprudence says the following in regard to constitutionality:

This only makes my argument stronger, however. Further, it puts officials in the Bush administration in jeopardy of serious capital charges should the Supreme Court ever deign to rule on this blatantly unconstitutional provision of the Military Commissions Act.

TAGS:
Constitution, Bill of Rights, Justice
Military Commissions Act, And Other Things That Make Me Want To Hurl