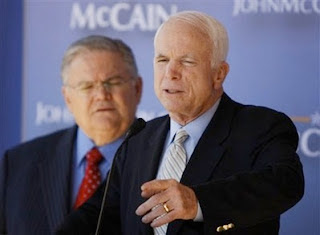 I was both outraged and a little amused Tuesday night by Tim Russert's questioning of Obama over Louis Farrakhan's supposed "endorsement" of his candidacy. I'm using the quotes, because Amad at Street Prophets clarifies that Farrakhan never endorsed Obama; he merely praised him, saying that Obama represents the "hope of the entire world." Obama denounced any alleged Farrakhan support, which wasn't good enough for Russert or Hillary Clinton, who insisted that "denouncing" Farrahkan wasn't enough for her and that he must "reject" Farrakhan's support. Whatever.

On Wednesday, McCain received the endorsement of Pastor John Hagee, who believes we have to stay buddy-buddy with Israel in order to bring about armaggedon and the second coming of Christ. And what was McCain's response?

"I'm very honored by Pastor John Hagee's endorsement today," McCain said at a news conference. "He has been the staunchest leader of our Christian evangelical movement in many areas, but especially, most especially, his close ties and advocacy for the freedom and independence of the state of Israel."

Honored, Mr. McCain? Why not privileged, flattered, thrilled and grateful?

"[A]ll I can tell you is that I am very proud to have Pastor John Hagee's support."

No that wasn't Senator McCain responding to me (as if) but rather his response when asked (via Greenwald)about some of Hagee's more twisted views.

As Amad rightly points out,

So, it is okay to be an anti-Muslim, anti-Catholic bigot, but not an anti-semitic bigot? And why is it that the 300 pound gorilla on the Capital hill, THE Lobby, AIPAC, actively cheers and supports Bigot#2, but cries foul when Bigot#1 says anything?

To learn more about Hagee, use the google. Or click on the Greenwald link, where he does a good job of outlining Hagee's beliefs. But just to get the murmuring started, here are a couple tasty morsels:

All Muslims are programmed to kill and we can thus never negotiate with any of them.

The End Times -- Rapture -- is imminent and the U.S. Government must do what it can to hasten it, which at minimum requires: (a) a war with Iran and (b) undying, absolute support for a unified Israel, including all Occupied Territories.

And if you have a few minutes, here's an interesting video of a Christians United for Israel conference:


Mr. Russert, will you be asking Senator McCain any time soon why he is embracing political support from an advocate for apocalyptic war? Or is Pastor Hagee your kind of bigot?