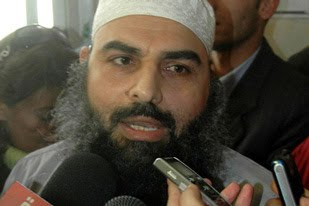 An Italian judge has convicted 23 Americans - all but one of them CIA agents - and two Italian secret agents for the 2003 kidnap of a Muslim cleric.

The agents were accused of abducting Hassan Mustafa Osama Nasr, known as Abu Omar, from Milan and sending him to Egypt, where he was allegedly tortured.

The trial, which began in June 2007, is the first involving the CIA's so-called "extraordinary rendition" programme.

The Obama administration has expressed its disappointment at the convictions. "We are disappointed by the verdicts," state department spokesman Ian Kelly said in Washington. He declined to comment further pending a written opinion from the judge, but said an appeal was likely.

Three Americans and five Italians were acquitted by the court in Milan.
[...]
The CIA's Milan station chief at the time, Robert Lady, was given an eight-year term, while the other 22 Americans convicted - one of them a US air force colonel - were sentenced to five years in prison.

A little more information that the BBC omits is available from this article at Al-Jazeera. For one thing the three Americans who were acquitted actually got a pass for having diplomatic immunity. For another the five Italians were acquitted because they were "protected by State Secrecy rules." Which leads one to wonder why the 2 convicted Italian agents were not covered by that umbrella. Hmmm...

The US State Department may be disappointed by the verdict, but I'm quite frankly delighted. And I'll tell you why. For more than three years now, over several posts, I've been saying that the weasel-word 'rendition' really means kidnapping, and should not be given any distinction any higher than that of an extreme criminal act. It's nice that a judge and jury agree. And as to the disappointment expressed by the US government, I already covered that in that post from Sept. 19, 2006.

In America we see a government that continues to deny their own criminal activity. Then when it becomes undeniable, they deny that there is anything illegal about it. Then, when THAT becomes undeniable, they try to retroactively make legal the most egregiously despicable actions. Sickening. As Glenn Greenwald asks, "How can you be an American citizen and not be completely outraged, embarrassed, and disgusted by this conduct?"

What they're disappointed with, frankly, is that their depraved indifference to the rule of law cannot be forcibly extended to other jurisdictions.

In an e-mail about this story Len Hart expressed the fervent hope, "Perhaps the CIA will --at last --be held accountable for its TERRORIST activities." I wouldn't advise him to hold his breath. Not with the kind of MSM reporting on the story that is exemplified by this exchange on CNN's The Situation Room.

Sorry, I have no transcript so this is paraphrased from memory (I wrote this in comments of the last post just minutes after hearing it however. It's pretty accurate as to the intent of what was said.) Wolf Blitzer is interviewing Jeffery Toobin, whose legal expertise puts him in a class with John Yoo, Jay Bybee, and Orly Taitz.

Toobin: "the bad thing about this is that because of Interpol the [convicted criminals] have to avoid travel not only in Italy but most of the rest of Europe as well.

Blitzer: It's part of the job description of the CIA that they go into other countries, and break the law. They break and enter. They engage in bribery, and so forth. Italy is an ally. They're supposed to have an agreement with the US about things like this. The system failed somehow."

The only agreement that any foreign country might have with the US (at least so far as international law is concerned) about spies is this -- if a spy has an official embassy cover, when caught spying they are not charged, but simply declared Persona Non Grata and expelled from the country. As noted above this is what happened to the three CIA criminals who had diplomatic immunity. The others had to have been what is known as NOC's (meaning non-official cover,) and should have known that they were vulnerable to charges if they broke Italian law.

Any argument to the contrary can be boiled down to two words; American Exceptionalism. Which, you may be surprised to find out (assuming you're an American) has no foundation whatsoever in international law. None. And 'legal expert' Toobin had to have known that. So he's either an incredibly incompetent attorney or he's a liar. Or both.

There are other elements to this story that I'll just touch on here. First, what an incredibly ill-conceived and counter-productive operation this was. Kidnapping and torturing a Muslim cleric?! What the FUCK were they thinking?

Second, while I generally agree with the outcome of the case I'm a bit disconcerted about the relative weight of sentencing. It was my understanding that this kidnapping was carried out over the strenuous objections of Robert Seldon Lady, the Milan CIA station chief -- who rightly "saw it as ill-conceived and counter-productive." He was over-ruled by some political authority that one must assume extended right up to the White House, probably the OVP. Why then should he have gotten eight years when the doofuses who actually committed the crime got five? For that matter, if you're trying leaders in absentia anyway, why were Bush the Lesser and Shooter Dick not charged? This was nicely covered at Crooks and Liars last April.

It’s not easy for me to generate a lot of sympathy for a CIA man involved in a kidnapping, but I feel sorry for Bob Lady.
[...]
He and his wife loved Italy so much they bought a house in the foothills of the Alps and retired there in 2004. Months later an urgent call came, warning Lady to get out of Dodge — don’t even pack. The cops were on their way.

Tipped off, the Ladys successfully fled the country. But they left behind a bonanza of evidence in their dream home, not the least of which was a CIA surveillance photo of the kidnap victim, Osama Mustafa Hasan Nasr, known as Abu Omar...

The little guy stuck carrying out the operation (that he objected to) had to flee his home to avoid imprisonment, not to mention lost his wife, and all their property in Italy may go to Omar as restitution for his rendition...And the CIA abandoned Lady, disowning him as an employee and refusing to assist him in any way.

So, as with Abu Ghraib, the accountability begins and ends with the least powerful and never makes it up to the top decision makers.

As with everything the administration of Bush the Lesser touched, in this case loyalty only ever worked in one direction. Some days it just sucks to be Mr. Phelps.

"Good morning, Mr. Phelps. We have a mission for you.
...
...
As always, if you're caught or killed the secretary will disavow all knowledge of your actions."
~~~~~~~~~~~~~~~~~~~~~
ADDENDUM:
With any post that involves torture one feels compelled to remind readers that it is not only despicably inhuman, but is totally ineffective as an intelligence tool. Here's a quote on point from Nineteen Eighty-Four:

He became simply a mouth that uttered, a hand that signed, whatever was demanded of him. His sole concern was to find out what they wanted him to confess, and then confess it quickly, before the bullying started anew. He confessed to the assassination of eminent Party members, the distribution of seditious pamphlets, embezzlement of public funds, sale of military secrets, sabotage of every kind. He confessed that he had been a spy in the pay of the Eastasian government as far back as 1968. He confessed that he was a religious believer, an admirer of capitalism, and a sexual pervert. He confessed that he had murdered his wife, although he knew, and his questioners must have known, that his wife was still alive...It was easier to confess everything and implicate everybody.

Clarification: One other small point just to be accurate. For anyone hoping that the US government, Justice Department, Obama administration or any combination of the above will eventually step up, do the right thing, and extradite the guilty parties to Italy - fuggedaboudit. The fact is that extradition requests were made long ago, and were refused. Duh-uh, that's why they were all tried in absentia.

TAGS: Extraordinary Rendition, CIA Kidnappers
The Not So Great War on Tur'r
You Can't Make This Shit Up