Don't Ask, Don't Tell Before and After 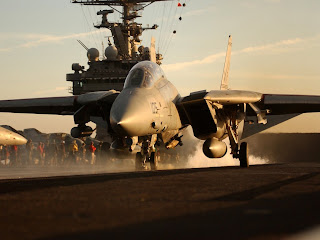 TAGS: DA,DT LGBT Navy Douchehattery
Some of the readers here are familiar with the general parameters of my story so I won't get too specific. I used to be an airframe technician for F-14A aircraft during the last half of the 1980s until early 1991. Although I wasn't a huge fan of the United States Navy, I enjoyed my job and I was good at it. VERY good. In fact I was so good that after I had been outed as transgendered, (by a "friend" who used his knowledge to distract from his second DUI offense), and after I had gone to Captain's Mast and after I had been told they were going to strip me of rank, benefits I'd earned and half of my pay, I was actually involuntarily EXTENDED to serve in the first Persian Gulf War. You see, though I had been deemed "unfit" to serve, I was the only person qualified to troubleshoot launches for the airframes shop and to act as flight deck safety at the same time. They told me I was being unceremoniously discharged but had to stay long enough to qualify people to replace me.
Before the hostilities were ended, I was on my way back to the states. Within 24 hours of landing, I had been reduced two pay grades, stripped of the benefits I'd earned and given an "Other Than Honorable" discharge. I say this not because I'm still wallowing in self pity after all of these years but to point out that, abominable as it is, the "Don't Ask, Don't Tell" policy is a relative newcomer and much, MUCH better than the previous patchwork of regulations regarding LGBT service people. Then, it was largely up to the unit commander what happened to an outed person. In my own case, the unit commander had no problem with it because he knew me and what I was capable of. I was told nothing was going to happen. That was before the change of command. The new skipper DID have a problem with it, a huge one. As I hadn't even violated the UCMJ, charges were trumped up to get rid of me. I fought for a while but it was clear from the beginning that they would wear me down eventually. If they want you gone, gone you will be.
Don't Ask, Don't Tell was a compromise, (or capitulation), made by President Clinton and was codified into law on December 21, 1993 when Clinton issued Department of Defense Directive 1304.26, requiring the DOD to stop asking applicants and active duty service members to disclose their sexual orientation. It not only supposedly put a stop to that, it also homogenized the penalties and in most cases softened them, for violators of the policy against LGBT persons. For example, it was no longer solely up to the unit commanding officer what penalty violators would pay, they would all be given administrative discharges under honorable conditions, allowing them to keep their rank, pay and benefits. It didn't stop the harassment or the witch hunts though.
Though I detest the Don't Ask, Don't Tell policy, it is leaps and bounds better than what used to happen prior to it coming into effect. Randy Shilts wrote an excellent book called "Conduct Unbecoming" about lesbians and Gays in the military and I recommend it to people who harbor illusions about what the policy used to be and what it is today. As much as I would like to repeal "Don't Ask, Don't Tell", I have never heard of the policy being repealed for transgendered people, just for lesbians and gays. Presumably transgendered Americans will still be sexually assaulted, harassed and hounded out of the service on trumped up charges. That doesn't seem to bother gay leaders much, most of whom have never served.
I'll close by dispelling a few myths:
Myth 1) The military is some hyper macho organization, rampant with homophobes and conservative bigots.
Fact: The military is a reflection of society, except a more disciplined reflection for the most part and a much younger one overall than society as a whole.
Myth 2) Congress has to repeal Don't Ask, Don't Tell
Fact: Don't Ask, Don't Tell is a Department of Defense Directive, later codified into law. The commander in chief could repeal it unilaterally and immediately.
Myth 3) Repeal of DA,DT would affect unit cohesion
Fact: Actually this one is true, it will make it much better since dishonesty breeds mistrust, honesty can only foster greater trust.