Canadian Study a Lesson for Teabaggers

"Three in Four Suffer From Cuts to Public Spending" 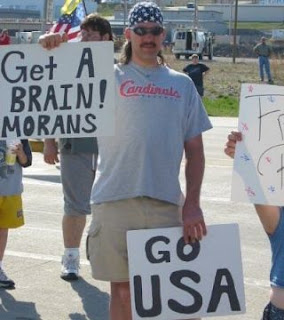 Tax cuts could diminish the standard of living for the vast majority of Canadians who enjoy the public services that they fund, according to a study (pdf HERE) by the Canadian Centre for Policy Alternatives released on Wednesday.

The majority of Canadian households enjoy a higher quality of life because of the public services their taxes fund, the study argues.
[...]
"What passes for a tax cut debate in Canada is really only half the debate," said study co-author Hugh Mackenzie, an economist. ..."The suggestion we often hear, that taxes are a burden, hides the reality that our taxes fund public services that make Canada's standard of living among the very best," he said.

The study uses Statistics Canada data on government revenues and expenditures to compare public spending in categories including health care, education, social services, old-age security benefits and employment insurance. ...Using the statistics, the report finds that the average per capita benefit from public services in Canada in 2006 was about $16,952.
[...]
"The overall impact of tax cuts — and the cuts in public services that accompany them — has not been addressed in any substantive way," the study states. "Tax cuts are always made to sound like they're free money to middle income Canadians. They are anything but," Mackenzie said. "We're far better off with the public services our taxes fund than we are with tax cuts." Any reduction in income tax results in an equivalent constraint on public spending, the study says, and about three in four Canadians suffer from cuts to public spending.

Overall, the tax cuts implemented in Canada in the last 15 years have had the net effect of reducing the living standards of most Canadians, the reports says.

The study also finds that the number of public services used by Canadians appears to increase as household income and size increase. This is particularly true for households that have children who are accessing publicly funded elementary and secondary schools and seniors who are more likely to use the public health-care system. "Families with young children will tend to benefit relatively more from the health-care system, whereas families with older children will tend to benefit from the public education system to a greater extent than other types of families," the study states.


It's not hard to predict the kind of reaction that this report is going to get from the conservative movement in the US. Reports based on provable facts and confirm-able statistics are not to their liking anyway. They much prefer to rely on ideologically-based theory drawn out of thin air (or worse) - thin air that evidently gets compressed and heated, then spewed out of bloviators' blowholes at FOX "news" in support of this tea-bagging movement. Which, by the way, is an excellent example of astroturfing as defined by Wikipedia, "formal political, advertising, or public relations campaigns seeking to create the impression of being spontaneous "grassroots" behavior, hence the reference to the artificial grass, AstroTurf."

Nor should the motive behind this campaign escape anyone but the morans (sic, see photo) it is directed towards. (or should that be against?) The conservative movement has been pretty successful in the past at getting the poorly educated to vote against their own interests based on simplistic slogans. "Read my lips, just say no, drill baby drill" etcetera. My guess is that they're trying to bring back the glory days of monosyllabic right-tard propaganda -- in spite of being utterly discredited by the spectacular economic disaster wrought from their trickle-down 'free market' policies. My hope is that they're wrong, and that even the worst of the low-information voters will wake up once they've lost their jobs and their homes, and are living in cardboard boxes and depending on food stamps. But then, past experience has been that really poor people don't vote at all, and the GOP has made it nearly impossible for the homeless to even register to vote, so that hope might be a bit optimistic.

The Economist just hosted a debate on whether it's time that the rich be required to pay more in taxes. Just reading some of the closing remarks by Chris Edwards of the Cato institute, arguing against the motion, reveals the paucity of the conservative argument. Unable to attack the logic of his opponent, he mounts a personal, ad hominem attack. "[Parisian economist Thomas] Piketty's understanding of the nature of income is very European, " he whinges. Name calling is rightly regarded as the lowest rung on the scale of debating technique, (see triangular diagram near the bottom) and is characteristic of someone who can't base their argument on facts or logic. So I would say the pro-tax side won the argument.

(Parenthetically, it could, should and must be said that this debate is just one battle being fought in an ongoing and increasingly bitter war between the classes. Because this whole unfortunately named teabagging movement is nothing more than a propaganda effort to perpetuate the Reagan tax cuts. The rich would prefer that you pay for the jackboot that presses against your own neck. If you don't mind, there's a good boy.)

One of the comments at The Economist succinctly expresses why certain functions should not and can not be left to the marketplace.

Of course, the free market doesn't provide universal quality education: thus we must rely on governments to provide this service, and others like it that also serve the greater good but generate no profit. Isn't that the point of taxes in the first place?

I would add an observation of my own to that argument. When governments contract out to private enterprise to provide necessary services, they almost invariably do so under a system that is more crony capitalism than healthy competitive free enterprise. Can you say 'cost-plus, no-bid?' It is far better for the public that the money be spent within a government department where it can be more carefully controlled, and where there is recourse for diversion, mis-spending and waste. The whole 'privatization is more efficient' argument falls apart under any close examination.

Certainly the argument against paying taxes for government corruption is a valid one, but just as certainly the remedy is to attack the corruption, not the taxation. Ironically the same type of people who want to spare their buddies the burden of paying their fair share tend to be the type who want to pay off those same buddies through graft. A kind of self-fulfilling prophecy which if you think of it is hardly surprising considering that they want the government to fail. Or at least they claim to; really what they want is a government under their control - maximizing and guaranteeing their profits, socializing their losses, and calling out the guard should the hoi-polloi ever get fed up with the arrangement. In a word, fascism.

Going back to the comment made in The Economist, I think the author chose the perfect example. There is no better investment that a government can make than providing the public with free quality education. A better-educated citizen will earn much more during his lifetime, eventually paying back all the taxes gone into his schooling with interest. Which a wise government will then re-invest on educating his kids.

Maybe it's high time that the wise taxpayer learned that simple lesson. It would certainly be preferred to being conned into participating in some phony protest against your own interests.

ADDENDUM: Just as one example of the COST of LOWER taxes, here's a study of what it cost Americans to NOT have universal health care. (From the National Coalition on Health Care.) Just one fact from this piece forms a conclusive argument. The US spends 17% of GDP on health care and 40% of people are either not covered or not sufficiently covered. Canada covers EVERYBODY for 9.7% of GDP.