Australia Joins Coalition of the Leaving

Over the weekend Australia pulled their troops from Iraq. 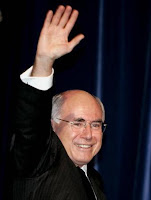 SYDNEY, Australia - Australia, a staunch U.S. ally and one of the first countries to commit troops to the war in Iraq five years ago, ended combat operations there June 1.

Soldiers lowered the Australian flag that had flown over Camp Terendak in the southern Iraqi city of Talil. The combat troops are expected to return to Australia over the next few weeks.

The move fulfills a campaign promise by Prime Minister Kevin Rudd, who was swept into office in November largely on the promise that he would bring home the country's 550 combat troops by the middle of 2008. Rudd has said the Iraq deployment made Australia more of a target for terrorism.

Rudd's predecessor, former Prime Minister John Howard, said he was "baffled" by the decision to withdraw the troops.

For those looking for a model for prosecution of crimes committed by the Bush administration might want to keep an eye on former Prime Minister Howard. A legal brief has been sent to the International Criminal Court by something called the ICC Action Group, which the Australian Broadcast Corporation says is comprised of "peace activists, lawyers, academics and politicians".